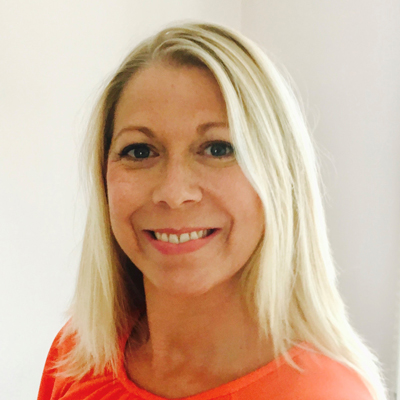 Not every career path is straight: after 20 years in the media and marketing industry, a ‘pot-luck’ opportunity put Caroline at the start of a new career path; one that has helped her grow and empower and inspire other women.

I don’t believe anyone has a straightforward path in to the tech industry, mine certainly wasn’t.

My education in the 1970s and 1980s was very traditional. Science subjects were limited to the classroom, with very little context given to the effect technology (i.e. the launch of mobile telecommunications) was having on society at the time.

I remember very clearly, as a girl, we were encouraged towards the humanities and the arts; boys were pushed towards the sciences.

Fast forward to 2019 and childhood has changed. Children are exposed to, and engage with, technology from a very early age, so we need to teach them about its impact as early as possible.

I think we underestimate children and their ability to understand tech. My six-year-old is currently learning to code (not encouraged by me, honest!). In her ICT class she is working on an app for collecting pocket money from chores!

My career after school

I, however, did end up going down the creative route of studying ‘Art and Design’ at Uni. It was very old-school, we used drawing boards, printing presses, there was no CAD (Computer Aided Design) until the year after I left university.

I spent 20 years in the media and marketing industry in different roles and different companies, but it was at CSquared where I got the chance to immerse myself in the tech industry. I met and worked with many tech companies, who at that time, were beginning to disrupt the digital media landscape. It was awe-inspiring watching how media, creativity and innovation were blending.

Media tech was one of the fastest growing industries in the 2000s. I was one of the lucky ones; I had a front row seat watching and working with companies who were trailblazing ideas that ultimately changed the future of advertising.

I wanted the ‘techy’ client!

I left CSquared in 2015 to find a role that would work around my young daughters’ schooling. I applied for a Digital Mums Social Media Management course, and it was this course that led me to SheCanCode. We were all allocated a live client to work with and while others were hoping for a fashion, beauty and consumer client to work with, and dreading getting the ‘techy’ one, I was hoping the exact opposite! As luck would have it, in 2016, I started working for SheCanCode as a Social Media Manager.

Three years on, and I am now Head Girl at SheCanCode. We continue to spend our days inspiring, supporting and empowering more women to enter, return or remain in careers in tech. I am highly driven and passionate about ensuring that the workforce of today is representative of our society at large.

We work with companies of all size and shape, to help them market effectively to our community, whether that be through content, events or jobs, so that they too can attract more women. I have spoken to many companies who pledged to improve diversity and have introduced new initiatives to do so. Limited progress has been made, but we are moving in the right direction.